‘All social life is essentially practical. All mysteries which led theory to mysticism find their rational solution in human practice and in the comprehension of this practice’. Karl Marx

Critical realism is the and development of a number of central works including A Realist Theory of Science in the philosophy of science, and the Possibility of Naturalism and in social science, and the works of Margaret Archer including, Culture and Agency: The Place of Culture in Social Theory and Realist Social Theory: The Morphogenetic Approach, Cambridge University Press, Cambridge.

For a short introduction see:

In A Realist Theory of Science (1975), Bhaskar argues that the revindication of ontology (that is the study of being) is necessary, not only for providing a realist account of science, but for science itself to understand and sustain the grounds of its own intelligibility and practice. It does so through an inverted Kantian transcendental argument which asks, what must the world be like for knowledge of the world to be possible? In this question we can already begin to see the emphasis of critical realism; prioritising ‘the world’ (the real) over any system of understanding or practice.

So, in order to maintain the intelligibility of scientific understanding, particularly the fallibility and transformation of human knowledge, it holds we must separate epistemology (knowledge, systems, thoughts, ideas, theories, language…) from ontology (being, things, ontics, existents, reality, objects of investigation). This distinction between what critical realism calls the transitive (the changing knowledge of things) and the intransitive (the relatively unchanging things which we attempt to know) is a critical distinction which runs throughout critical realism.

In particular this distinction targets the widely held belief that to speak or desire to speak about “the real world” is either naive or meaningless, and we must only speak of the way in which we understand or arrange the real world, be it through forms of thought, habits or customs, models, or language. This tends to  collapse “mind-independent” being into our knowledge or experience of being (which Bhaskar labels the epistemic fallacy), and is the basis of providing an anthropomorphic account of the world.

Against this, Bhaskar not only argues for the need to do ontology, but for a structured and differentiated ontology which is necessarily presupposed by scientific practice, and in particular, the practice of scientific experimentation. The basic tenets and logic of this argument are simple enough, but the implications extend to a radical revision of the nature of causal laws as expressing the transfactual tendencies of things, and science as investigating mechanisms and not events in an open, and not closed world.

Real structures exists independently of, and are out of phase with, actual patterns of events necessitating the need to perform experimentation so that scientists might make sense of their operation in a controlled and non-complex environment (that is a relatively closed environment). David Hume famously argued that  causation was simply constant conjunction, we see one thing following another and believed them to be connected. This is true of closed systems in which event 2 always follows from event 1. But this is not universally true, and occurs only in certain situations, such as in a laboratory or similarly controlled environment. Most of reality is not a closed system, it is what we call an open-system.

In the open system, constant conjunctions are not always forthcoming. Event 2 does not always follow event 1: we simply need to consider history and social situations to realise this, however it is also true in science. Reality does not conform to the constant conjunction of events. Similarly reality does not conform to our experience of events. What is happening now, has happened, or will happen, is not exhausted by our knowledge or experience, nor does it exhaust the categories and possibilities of reality. Reality is complex, temporal, and changing. This critical distinction frames the differentiation of mechanisms from their exercise, and the occurrence of events apart from our experience (or knowledge) of them.

It is only if we make the assumption of the real independence of natural mechanisms and structures from the events by which they are known, that we can understand the nature of causality. Causality is thereby understood as operating transfactually, that is the ongoing operation of, and endurance of, these mechanisms apart from the experimentally closed conditions in which they are observed and identified.

The basis of causal law lay in the generative mechanisms of nature, of which we do not have direct, only mediated, experience. These mechanisms can be understood as the way things act, that is the structures, powers, and liabilities which frame an object’s tendencies as they operate and interact. These mechanisms are said to operate in both open and closed systems (but are of course more identifiable in closed systems) and may also be exercised without being manifest (RTS:14). It is thus the powers and potentials of objects (i.e. the operation of mechanisms), which outline the conditions of possibility for nomothetic and normic (i.e. universal) statements.

‘What properties do societies possess that might make them possible objects of knowledge for us? My strategy in developing an answer to this question will be effectively based on a pincer movement. But in deploying the pincer I shall concentrate first on the ontological question of the properties that societies possess, before shifting to the epistemological question of how these properties make them possible objects of knowledge for us. This is not an arbitrary order of development. It reflects the condition that, for transcendental realism, it is the nature of objects that determines their cognitive possibilities for us; that, in nature, it is humanity that is contingent and knowledge, so to speak, accidental. Thus it is because sticks and stones are solid that they can be picked up and thrown, not because they can be picked up and thrown that they are solid (though that they can be handled in this sort of way may be a contingently necessary condition for our knowledge of their solidity)‘. (PON 25)

In particular, critical naturalism seeks to resolve the dualisms prevalent in social science, namely, structure and agency, collectivism and individualism, reification and voluntarism, causes and reason, body and mind, facts and values.

Regarding structure and agency, and following Durkheim, critical realism holds structure precedes human agency in so far as it provides the material causes of human action. We are always thrown into a socio-linguistic-epistemic context in which we must act. But following Weber, the structures of society must not be reified, but operate through the mediation of human agency and social activity. ‘Society is both the ever present condition (material cause) and the continually reproduced outcome of human agency. And praxis is both work, that is, conscious production, and (normally unconscious) reproduction of the conditions of production, that is society. One could refer to the former as the duality of structure, and the later as the duality of praxis (PN 44).’ This dynamic relationship between structure and agency forms the transformational model of social activity (TMSA) and the basis of social scientific investigation in the relationships which constitute ‘society’.  People do not simply create society, for it pre-exists them and is the necessary condition for their activity. Rather, society is instead to be regarded as an ensemble of structures, practices, and relationships, which individuals both reproduce and transform, without which society would not exist. 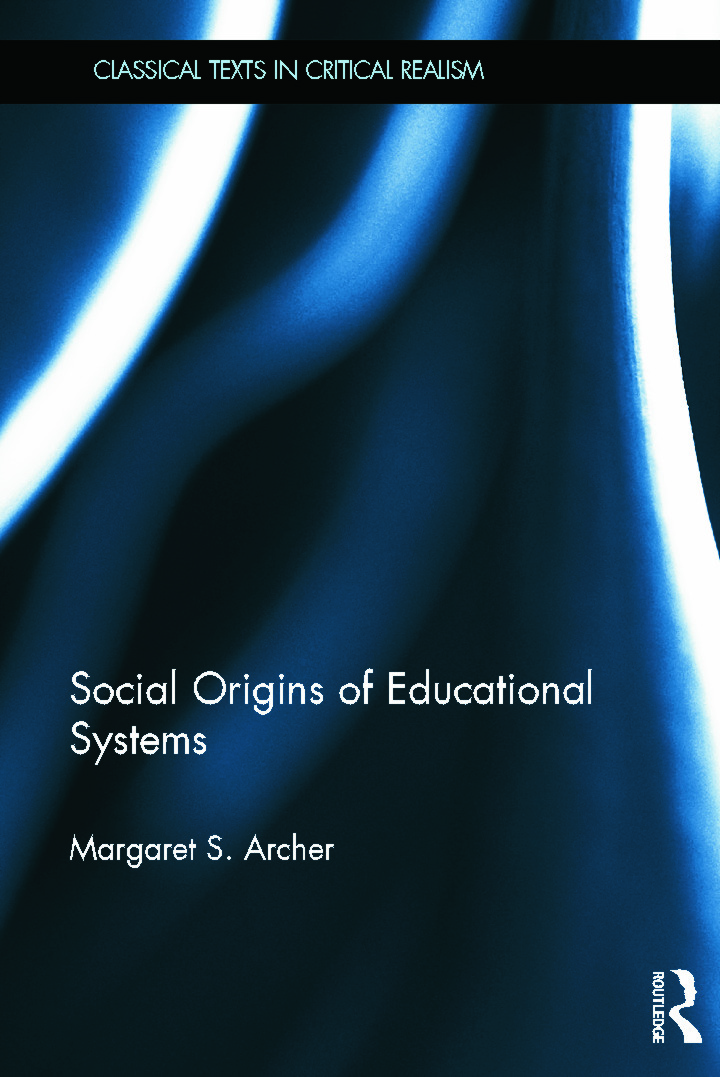 her famous critique of Anthony Giddens and structuration theory in 1982 in the British Journal of Sociology Archer’s work has been consistently committed to resolving the tensions in social theory between structure, agency and culture. Indeed, Archer would suggest “The fundamental problem of linking human agency and social structure stalks through the history of sociological theory” with the result that “theoretical developments have tilted either towards structure or towards action, a slippage which has gathered in momentum over time”.

The champion of the day, structuration theory, sought to unite certain functionalist and interactive traditions without derogating the lay actor. However as Archer was to highlight this attempt at duality resulted in an uncontrolled oscillation between moments of structural determinism in which the agent appeared as powerless and passive, and moments of extreme voluntarism in which the agent appeared as completely self-created. At the heart of this was a collapse of analytic dualism which can be represented as an immediacy or a lack of distance and differentiation between moments in which structures are reproduced and moments in which structures are transformed. Notably, in Giddens this meant structures were by and large atemporal and synchronic without much thought given to how the transformation of social structures by agents is possible. Archer argued that the morphogenetic approach coupled with an analytic dualism was a much better footing for social theory.

The morphogenetic argument was that structure and action operate over different time periods such that:
• structure logically predates the action(s) which transform it (t1),
•  structural elaboration logically postdates those actions, which can be
represented as shown in (t4)

In truth, all three lines are always continuous, and the element of analytical dualism only operates to break up the flows into intervals critical to understanding the problem in hand and preventing to collapse into indeterminacy or duality. Given any particular problem, understood temporally , the three lines all extend equally backwards and forwards, connecting up with other morphogenetic cycles. This approach represents the bedrock of  understanding of social and systemic properties, of structuring over time, and enables explanations of specific forms of structural elaboration.

This approach has been refined and further developed by Archer in her many works, elaborating the mechanisms of social transformation, the vital role of the internal conversation, and the analytic necessity of understand the social world as consisting of structure, agency, and culture (SAC), and most recently, the role of reflexivity in the modern world.

Actualism:  the reduction of causal mechanisms to their exercise, functioning to generate a regularity determinism in nature to facilitate a fetishistic quest for closure and closed systems

Epistemic Fallacy: the reduction of being to our knowledge of being, or, that statements of being are to be interpreted as statements about our knowledge. Notably, in 20th century philosophy, this finds expression in the linguistic fallacy which brackets off being to questions about language.

Transfactual: causal laws operate as tendencies of things expressed as powers, potentials and liabilities which may exist without being actualised. They are said to be transfactual because they can be isolated and express themselves within a closed system structured by human intervention, when they may not act, or act differently within open systems.

Roy Bhaskar, The Possibility of Naturalism